Why giant technology companies are bubbled up, acquired, or get busted up!

Home Disruptive Tech Why giant technology companies are bubbled up, acquired, or get busted up!

Fundamentally, what went wrong with companies like Kodak, Nokia, Ericsson and other similar companies were not new to the technology industry where the leadership often lacks the deftness to navigate through the capricious technological sea changes. For example, Ericsson, Kodak and Motorola suffered this same faith. Retrospectively, in the 1980s, stakeholders in grocery industrial embarked on online groceries distribution to customers using webvan.com and so did Boo.com used for sportswear distributions. There was the faming and flaring up of these inchoate technology companies. These disruptors bubbled up, boggled up, then cooked up various creative innovations and eventually busted up the technology industry. Additionally during these periods, there was a vacuum of emotional intelligent amongst hierarchies of various leadership styles that were used in these organizations vis-à-vis Nokia Corporation. Leaders who lack emotional intelligence were detached from the brutal reality confronting their constituents because these leaders refused to be creative rationally and were neither empathetic nor humanistic in nature and these inanities were counter to good leadership.

With Nokia, what the leadership of the company failed to foresee was the rapid changes in the business environment and the culture that sustained the company decades ago were no longer helpful. Analytical toolkits that were unheard off decade ago were presently used to glean important data from large big datasets streaming into organizations and were consequently used to predict future consumer behaviors. For example, other technology company like APPLE and Samsung were already taking the lead in the telecommunication industries with newly creative products. And these products were better and demonstratively with more consumers’ friendlier products than that of Nokia. Strangely, the strategic vision to anticipate changes, foresee changes in the horizons, and quickly adjust to those changes should be the lessons impacted on corporate leadership. For example, the deftness of the leaders in these technology companies’ not adroitly creating internet platforms like the internet of things (IoT) or the industrial internet of things (IIoT) will eventually lead to their demise or have led to the demise of many other similar giant industries (Aluya and Garraway, 2014). Alternatively, the inability of the deft leader to understand the seamless working synergies and the contributing collaborative efforts of the Data Analysts (DA), Data Scientists (DS), Information Analysts (IA), or the convergence of Information Technology (IT) and Operational Technology (OT) becomes the catalysts for the survival of the company. See the diagram below. 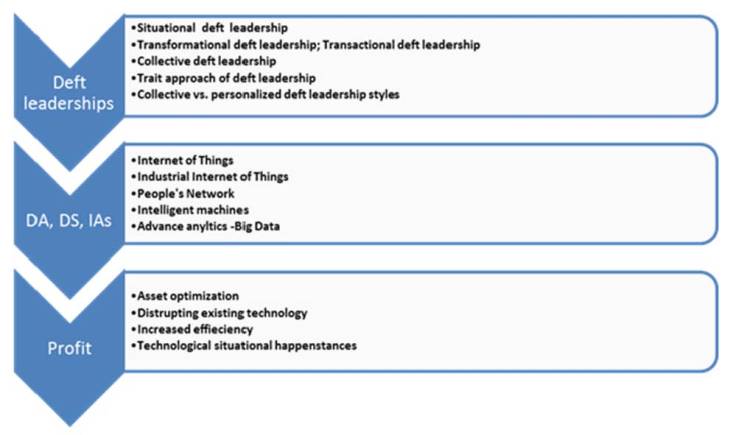 With the plethora of data available in Yottabyte or Zettabyte, it has become onus upon the leadership of an organization to listen to pertinent suggestions that emanates from the managers or sub-teams of data analysts, data scientists, and information analysts in making strategic decisions. To maladroitly refuse to use filter information coming from structured or unstructured data sets gleaned with analytics for strategic decisions have resulted in foreclosures of many businesses and the termination of the many leaders. Because this information when progressively or regressively analyzed and used, predict future trends that would lead to profitability. Irrespective of what kind of deft leadership style that was applied, not listening to managers, not understanding important data gleaned from big datasets have resulted in the achilles hills of some major CEOs and the demised of many technology companies mentioned above.

Leave a reply Click here to cancel the reply

As a benchmark, the Journal of Disruptive Technology (JODT) seeks to improve submissions prior to approving their publication. Our peer-reviewed process reflects the necessary rigor and scrutiny needed to bring forth the submission’s essence. Such submissions should be novel and substantial. Since our distribution is global, our reviewers follow guidelines that are thorough and rigorous. In addition, each submission has a dedicated quantitative and/or qualitative review, and unnecessary delays to the submission’s publication are kept to a minimum. It is our practice to circulate galley proofs prior to final submission and each manuscript is printed with the submission date, the revision date, and an acceptance date. While the traditional operational functions of the journal include peer review, editing, and final proof.

We're not around right now. But you can send us an email and we'll get back to you, asap.